The Greeks said that all beauty is mathematics. If that is true then perhaps there is a mathematical code, formula, relationship or even a number that can describe facial beauty.

Historically many different numbers have been tried in an attempt to describe beauty, however, only one mathematical relationship has been consistently and repeatedly reported to be present in beautiful things.

This particular relationship is the “Golden Ratio”. It is a mathematical ratio that seems to appear recurrently in beautiful things in nature as well as in other things that are seen as “Beautiful”.

Many things found in nature have parts that are in a ratio of 1.618:1 as you can see in the images attached.

Other Names For The Golden Ratio:

The term “Golden Proportion” is also referred to by other names including:

As it turns out, the Golden Decagon Matrix is not only the geometric “source code” for DNA, and hence life, but also of the attractive or “beautiful” human face as well.

The face is entirely constructed from the “golden decagon matrix” configuration. This is why all of the “phi elements” appear in the face.

The colorized “Golden Mask” appears as the Primary and Secondary Golden Decagon Matrices fade away leaving only the parts of themselves that actually form the mask and its components. 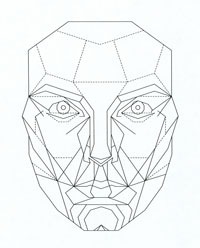 The Golden Elements in the Constructed Golden Facial Mask:

The final “Golden Mask” is ultimately shown in “gold”, representative of its construction from the “Golden Ratio”.

Plastic surgeon, Dr Steven M Marquardt, has patented a whole mask for this PHI golden concept. To find more details regarding this check out this site: Beautyanalysis

Below are some examples of the mask of some famous people.

Marquardt also superimposes his Mask on several pieces of famous artists on the MBA site.

Lady Agnew by John Singer Sargent. Lady Agnew was considered a beauty, and Sargent’s painting does her comeliness justice.

Angelina Jolie fits the mask pretty well, except for her lips being larger than average, which should come as no surprise. (Her head is tilted downward in this photo, which would account for some of the ill-fit around the jawline).

Jolie’s counterpart in beauty, Brad Pitt, however, doesn’t fit the Mask well at all. At its best fit (top), the Mask would indicate that Pitt’s nose is too wide, and his jawline too pronounced for mathematical beauty.

Soccer superstar turned occasional model, David Beckham, however, fits the Mask almost perfectly, the only variation seeming to occur in the brow area, though the flattened eyebrow area is not uncommon in European Caucasians. It would be of no surprise to Marquardt that Beckham fits the Mask so well, as the doctor feels that athletes are predisposed to physical symmetry. It is this symmetry which makes them good athletes and results in so many athletes being attractive.

The mask can be downloaded from Dr Marquardt’s website, listed above.

Leave a reply Click here to cancel the reply

Would you like some more information or to make a booking?